I've never had a big press release before so this is another exciting development in my illustration adventure! 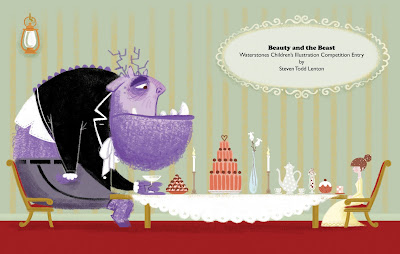 London-based freelance illustrator, Steven Lenton has beaten hundreds of artists to secure a place in the final of Picture This 2011, Waterstone’s nationwide hunt to discover the next big name in illustration.
In June, the bookseller invited readers to vote for a favourite fairy tale that they would like to see brought to life by Michael Morpurgo, one of the world’s greatest storytellers. Over 1,000 people voted, and the winner, Beauty and the Beast, was announced at the Telegraph Hay Festival.
Aspiring children’s book illustrators were then invited to submit their interpretations of how the main characters would look, alongside a scene from the much-loved fairy tale. The winner will receive a lucrative publishing contract to illustrate Morpurgo’s story in late 2012.
Waterstone’s received hundreds of entries, and a shortlist of seven artists, including Steven, was chosen by an expert panel, including Waterstone’s Children’s Books Buyer Kate Skipper, Deputy Editor of the Daily Telegraph Review Ben Secher and Harper Sales Director Kate Manning.
Steven is a character designer, animator, art director and illustrator, based in central London. He is currently writing and illustrating his first children’s title and has lots more ideas waiting in the wings.  He also sells his greetings cards and prints online.
Kate Skipper said: “The judges were incredibly impressed with the strength of the entries again this year, and after much deliberation, a very exciting shortlist of seven illustrators has been chosen. Each entry has a very different art style and we think all have the potential to go onto successful illustration careers.”
The seven must now provide full colour artwork for two more pages from the book, plus sketches for the remainder. The winner will be chosen in October.
- Ends -

·      Els Dolan ( Cambridge)
·      Madeline Hill (London)
·      Steven Lenton (London)
·      Matt Robertson (Norwich)
·      Sophy Henn  (Brighton)
·      Tracey Smith  (Fife)
Picture This
The winner will receive a £6,000 contract, and see their work illustrate Michael Morpurgo’s words when the book in published in late 2012 as a Waterstone’s exclusive. The first Picture This competition found a new illustrator, Karen George, to work with Julia ‘The Gruffalo’ Donaldson.  The resulting book, Freddie and the Fairy, was one of Waterstone’s Christmas bestsellers last year, selling over 35,000 copies by Christmas day.

Awarded an OBE in 2006, Michael Morpurgo is one of Britain's best-loved writers for children. He has written over 100 books and won many prizes, including the Smarties Prize and the Whitbread Award. In 2005 he won the Blue Peter Book Award for his novel Private Peaceful, which was also adapted into an acclaimed stage play. His subsequent book, The Amazing Story of Adolphus Tips, spent an astonishing 20 weeks in the bestseller charts, and his enormous success has continued with his most recent novels, Alone on a Wide Wide Sea and Born to Run. Michael was Children's Laureate from 2003 to 2005.
Posted by Steven Lenton at 02:14