Here is a very tiny miniscule snippet of a building from 'Shifty McGifty and Slippery Sam' - my book with the lovely Tracey Corderoy and Nosy Crow. 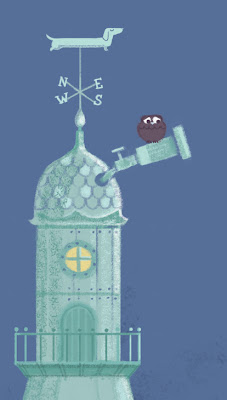 Now, this building has always had a special place in my heart because it is based on the Folly in Kings Cross, London.  I travel past this little monument every day as I head into the studio and as it is being freshly re-furbished I thought it would be nice to put a little nod to its quaintness in the book.

Nobody really knows the origins of the folly but some people think it once acted as a beacon for the Oyster Bar that used to be situated at the base of the building.  I really like using real buildings and locations in my books - it adds more depth and meaning for me.

Here are some pictures of the folly as it now stands (though currently it is surrounded by scaffolding!) It's lovely isn't it. 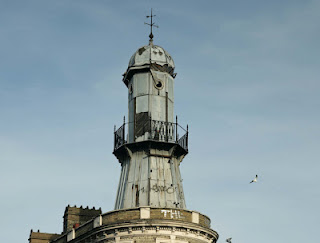 In Shifty McGifty my homage to the folly is a Sausage Dogs house where the occasional owl appears to plonk itself...but why does said owl look so concerned?  You only have til March 2013 to find out!
Posted by Steven Lenton at 05:03