I have been asked to partake in the 'Stars on Canvas 2012' Charity Exhibition and auction which will feature lots of petite canvases by illustrators, television, film and sports stars all in aid of the Willow Foundation.

I will post more about the exhibition soon, but for now I wanted to share the slightly nerve-wracking experience I had over the last couple of days creating my canvas.

I've been talking to my students about creative processes over the last couple of weeks so thought showing my process of painting this canvas might be (slightly) interesting?

As I had been asked to contribute as a children's book illustrator I thought it best to choose something from one of my upcoming books.

There is a little Scotty dog in Shifty McGifty and Slippery Sam who is (ssssssssh don't tell the other characters) my favourite of all the dogs in the story.

In one of the books spreads there is a painting above the Scotty dogs mantlepiece featuring one of his relatives playing the bagpipes (I think it's his Great Grandad but we will have to await his episode of Who Do You Think You Are? to find out).

I used acrylics, brushes, sponges and black ink to start building up the layers - here are a few photos of the painting process. 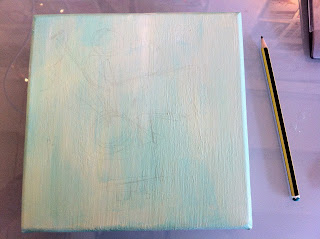 I took a while deciding on a background colour but opted for a textured teal to contrast nicely with the characters palette, then I very faintly sketched the character in HB pencil. 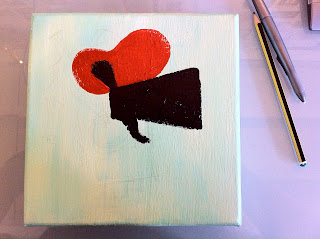 This was the scariest bit - painting the heavy black and strong red onto the pale teal. 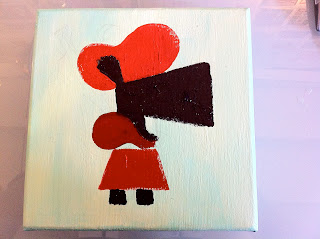 Next a cute little kilt and some bagpipes! 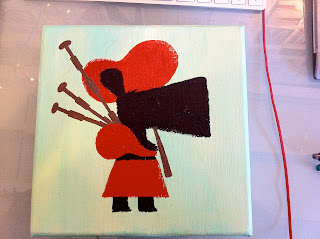 The pipes, the pipes were calling me. 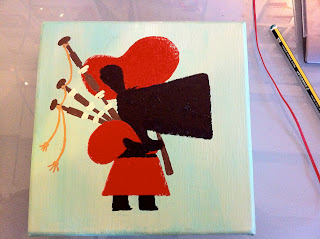 Tassels and pipe detailing next. 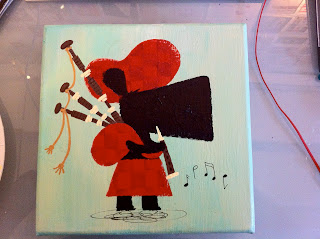 A scribbly shadow, some musical notes and some sponged checks. 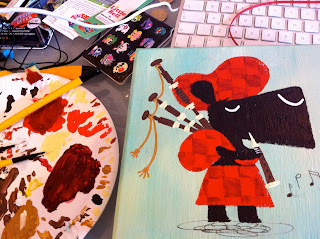 I thought I had finished at this point but just as I was putting the kettle on I noticed I had forgotten his sporran.
Note the paper plate - saves on the studio washing up! 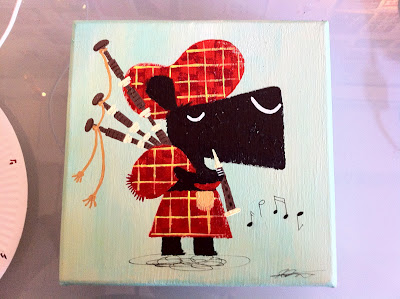 There it is! (minus one detail that I'm waiting for in the post)


There were a few wobbles hither and thither - I haven't used acrylics for quite some time but I got there in the end and really enjoyed it once I stopped panicking.

I will upload the finished version as soon as I've added the final detail that should be arriving tomorrow...